With much anticipation, the Green New Deal has been presented by Alexandria Ocasio-Cortez to much brouhaha. While the plan has lofty goals with no specifics, an area that needs to be addressed is in regards to agriculture. That portion of the bill reads:

“(G) working collaboratively with farmers and ranchers in the United States to remove pollution and greenhouse gas emissions from the agricultural sector as much as is technologically feasible, including—

Sustainable farming organizations and organic producers are optimistic about the proposed changes in promoting these practices, but there is little mention of supporting family farmers. A common misconception is that the majority of farms are not family owned, when in fact, only 2.2 percent of farms are nonfamily owned. This figure can be found in the report titled “America’s Diverse Family Farms” published by the USDA Economic Research Service (ERS) in December 2018. According to the USDA, the figures are derived based on, “annual revenue of the farm, major occupation of the principal operator, and family/nonfamily ownership of the farm.” Some facts of note in the report are:

A breakdown of production shows the difference in crops between family farms versus nonfamily farms: 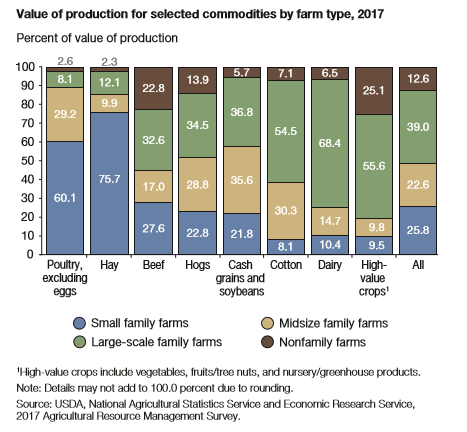 The idea of corporate farming and industrial agriculture producing the majority of food is a misnomer. The concept of these terms can also be explained by the Center for Rural Affairs as, “a system where the farm owner, the farm manager and the farm worker are different people. That’s a dramatic change from the historic structure of agriculture, where the people who labor in farming also make the decisions and reap the profits of their work.” It behooves farms to be placed in a Limited Liability Corporation (LLC) or an S Corporation for tax, liability purposes and estate taxes. Putting farms into these kinds of structures ensures that the family farm is passed down to other generations. To put it into perspective Ocean Spray, Blue Diamond and Sunkist are familiar names that are a farmer-owned cooperative of growers and are corporations. They are family farms that have agreed to form this entity for the benefit of marketing, discounts on purchases and other advantages of working together.

As the Green New Deal states it wants to “support family farms,” it needs to take into account that 97.8 percent of farms are family farms regardless if the income is $10,000 or $1 million. Supporting family farms should instead involve reform of existing programs that benefit young farmers, ensures transfer to future generations, free trade, supply chain management, less government overreach and comprises real Farm Bill reform.